Tim Eyman is a horse’s ass. But he’s also the only one of the Republicans running for governor who I had any idea about. Who else is running? Wasn’t there some guy who wasn’t going to enforce gun laws? Is he doing anything recentlOHGOD.

In a long-running lawsuit, a woman accuses police and deputies in Ferry County of failing to properly investigate when she reported a pattern of rape and molestation spanning 12 years of her childhood.

Among the defendants is Loren Culp, who is now the police chief in the town of Republic and a Republican candidate for Washington governor. The lawsuit alleges Culp and two other law enforcement officers intimidated the victim, threatened to charge her with making false claims and failed to report her allegations to child welfare authorities as required by law.

Of course a lawsuit filed isn’t the same as all of the accusations proven. But yikes.

My previous analysis of the Biden-Trump head-to-head polls was way back in early June, in part because the dynamics of the race didn’t seem to be changing much. Trump is slowly slipping in the polls, as the COVID-19 epidemic worsens in the U.S., as Trump resists movements for police reforms, and as we learn bizarre things like Trump not responding to Russian bounties on American soldiers in Afghanistan.

Basically, if the election was today, Biden would win in a landslide.

Trump has a serious electoral college problem. Many swing states are now trending strongly for Biden, including Florida, Michigan, and Wisconsin. Other swing states are pretty solidly in Biden’s camp, like Arizona, Colorado, New Hampshire, New Mexico, North Carolina, Pennsylvania, and Virginia. Even Ohio trends slightly toward Biden. Iowa and Texas are in toss-up territory, but leaning slightly toward Trump. Remarkable!

The trend over the past couple months are clear from from a series of elections simulated every seven days using polls from Jul 2019 to the present, and, at each point in time, including polls from the preceding month (FAQ). 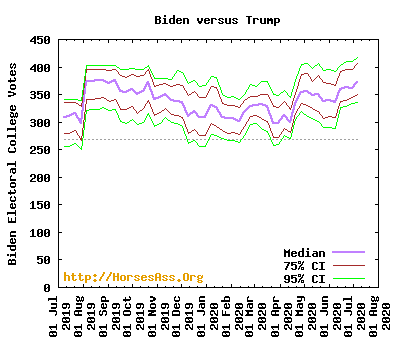 There is, of course, plenty of time to turn this trend around. Still, Trump’s bizarre and impulsive behavior will make doing that very difficult.

END_OF_DOCUMENT_TOKEN_TO_BE_REPLACED

I saw my parents for the first time since the quarantine started over the weekend. We had a socially distanced, masked walk and a picnick. It was a relatively low risk thing, but it was still nervous making. I was glad to see them, but still I don’t know.

Now This: Sen. Mark Warner on cleaning up national parks.

Samantha Bee: How to save the Postal Service

Now This: The fight to expand vote-by-mail before election day.

Trevor: The CIA is hiring.

Hasan Minhaj : Why doing taxes is so hard.

Roll Call: Congressional hits and misses of the week.

Now This: Who is Ron DeSantis? (Narrated by Yedoye Travis)

It’s depressing how the CHOP/CHAZ is ending. There was so much generated there. Art and community. A garden. But when self-declared security forces kill a Black child it’s tough to support the place.

None of this excuses the actions of SPD in the last month or so. None of this means tear gassing protesters is retroactively OK or that we can’t defund the police. Black lives still matter.

(At some point I will get back on track with these.)

The Supreme Court had another goodish ruling (pdf, I haven’t read it yet since I’m on lunch) in a high profile case. I am still concerned that Roberts is a swing vote in these decisions.

It’s definitely good that we’re winning these (for lack of a better phrase) culture war cases. But the court ruled on an exact same law a few years ago. It stinks that we have to play defense. If Justice Kagan (or Garland) were the swing vote, it would probably be on better cases.

Stephen and Jon: Joe Biden, humbled by grief, may be the leader America needs right now

Samantha Bee: Tarana Burke on the connection between police brutality and sexual violence

Forgot about a thread today. Here’s a limerick in honor of mask wearing being mandatory in Washington starting today.

You really should wear a mask, it

Is not much of a thing to ask, it

Will be a breeze,

And will slow the disease.

It might even keep you out of a casket.

I am glad that new rules for face masks are going into effect on Friday (pdf). It seems like a good public health measure. As with when it was Yakima County, I would prefer that this be on the government and employers rather than on individuals. I also hope you don’t call the police on some random person not wearing one.

Still, the coronavirus is spreading too much and some of you are not masking up. Come on.

It stinks that Governor Inslee has to issue an order to wear masks for Yakima County. But it is the correct thing to do. I would prefer the state put the mandate on businesses or made sure masks are available, rather than it fall to individuals. Although, I don’t know what the government’s power to force companies to act or local governments to spend money.

In any event, wash your hands right now.

King County is in Phase Two of the coronavirus response. The link has what various types of businesses can do. I am still pretty nervous about any indoor gathering for the foreseeable future. Like, you’re only as safe as the worst person around. And card rooms seem particularly no good. Ick.

Man, I don’t know if it’s just me getting older or something to do with the quarantine, but I am not sleeping well at all. I am still going to sleep and getting up at the same time as before. But now I am just exhausted all the time.

Cases of COVID-19 are increasing in Washington. It seems like this is to do with Memorial Day. Grand reopening maybe grand reclosing.

I don’t know if we’ll see future spikes based on the protests. It being outside, with masks, and in some cases spaced out, mitigates the spread. But big crowds and not always being able to keep distance isn’t great. I assume that we would have started hearing about cases if they were happening in large numbers.

The Night the Lights Went Out on Georgia’s Voters:

Trevor: Joe Biden on healing the country and acknowledging weaknesses

Hasan Minhaj: The news industry is being destroyed

Can’t Bring Yourself to Type the Word “Ass”?

Eager to share our brilliant political commentary and blunt media criticism, but too genteel to link to horsesass.org? Well, good news, ladies: we also answer to HASeattle.com, because, you know, whatever. You're welcome!

It may be hard to believe from the vile nature of the threads, but yes, we have a commenting policy. Comments containing libel, copyright violations, spam, blatant sock puppetry, and deliberate off-topic trolling are all strictly prohibited, and may be deleted on an entirely arbitrary, sporadic, and selective basis. And repeat offenders may be banned! This is my blog. Life isn’t fair.